Investopedia — Global investment firm KKR & Co. L.P. (KKR) has suddenly become a strong growth player in 2017. The company’s recent shopping spree has been a major catalyst for the renewed buying interest in the stock. But has the optimism run too far?

KKR shares closed Friday at $16.73, up 1.95%, translating to a rise of almost 9% from last week’s close of $15.39. After several weeks of stagnation, the stock has now already risen 8.71% year to date, compared to a 1.7% rise in the S&P 500 (SPX) index. Headquartered in New York, KKR is a private equity and real estate investment firm specializing in direct and fund of fund investments.

The company has established a diversified asset-buying strategy not only to help grow profit margins but also to give it exposure to numerous fast-growing industries around the world. The company’s $4.5 billion November acquisition of  Kansei, a fast-growing auto supplier with a strong foothold in the electric vehicle and self-driving car market, was a recent example.

Last week, KKR’s asset total grew again. The company’s subsidiary Venado Oil and Gas, LLC, bought Eagle Ford assets from SM Energy Company (SM) for $800 million. On the heels of the acquisition, analysts at Keefe, Bruyette & Woods, a New York-based brokerage that specializes in the finance industry, ranked KKR as one of the ten financial stocks to own in 2017.

KKR, which in the fiscal third quarter posted a net income of $598.2 million, reversing last year’s loss of 37 cents per share, continues to push all the right buttons. The prospects of lower corporate taxes, looser regulation and increased government spending under President-elect Donald Trump’s administration have ignited even more optimism about KKR’s ability to execute on its asset-buying strategy.

The stock has a consensus Buy rating and an average analyst 12-month price target of $18.00, implying a rise of 7.6% from current levels. And with the company expected to have more cash with which to maneuver, a $20 target yielding 20% returns is just as realistic. 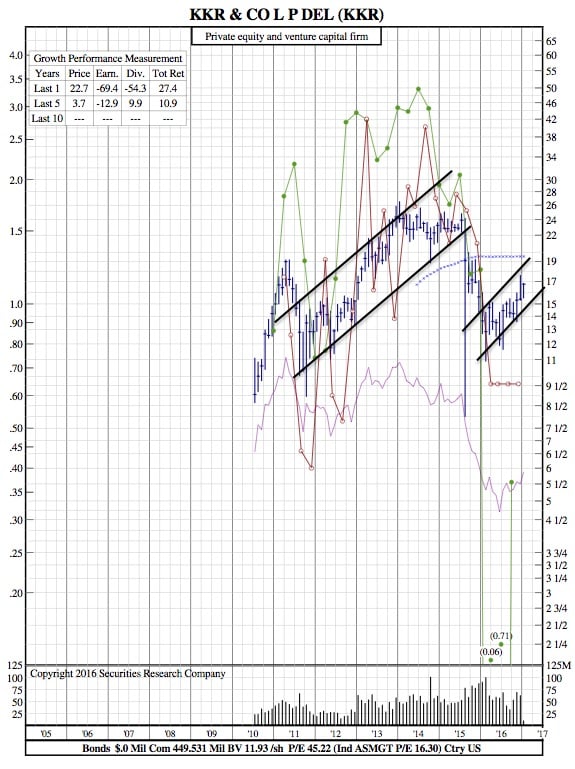