Bloomberg — Wall Street’s most vocal champion on U.S. stocks over the past two years is now its biggest bear.

Thomas Lee, managing partner and co-founder of Fundstrat Global Advisors in New York, published a note today saying the S&P 500 Index will finish the year at 2,275, about 3 percent lower than the median of 18 strategists surveyed by Bloomberg. His caution stems from policy risk and a yield curve adjustment he sees translating into an S&P 500 decline to 2,150 by mid-year before the index rebounds.

The “bond market is signaling inflation confusion,” and a flattening long-term yield curve, he wrote in a client note on Friday. That “generally leads to a 5 to 7 percent selloff,” he said.

It was Lee’s bullishness that made him the least accurate strategist on Wall Street in 2015, when the S&P 500 slid 0.7 percent. He doubled down in 2016 as the benchmark climbed 9.5 percent, and while his target overshot once again, he correctly predicted that the Federal Reserve’s decision to wait until December to hike rates and a recovery in corporate earnings would underpin stock gains into year-end.

Looking beyond the first-half selloff, Lee sees inflation expectations recovering, reversing four years of disinflationary trends. He also cited deregulation as potentially providing a “significant boost” to corporate business activity. Lee sees an 11 percent earnings expansion, a forecast that, while lower than the 12.3 percent estimate of economists surveyed by Bloomberg, would still mark the S&P 500’s best year since 2010.

Wall Street’s new king bull is Jonathan Golub, the chief U.S. market strategist at RBC Capital Markets. He has a year-end target of 2,500. Oppenheimer & Co.’s John Stoltzfus is the second-most bullish, with a 2,450 forecast.

Watching the price fall to 2,150 at mid-year and then rebounding to 2,275 seems like a plausible outcome given where earnings are currently. A drop down to the 2,100 range could bring price and earnings closer together as they were at the beginning of 2016 – this, before a 17% rise to today’s current price. 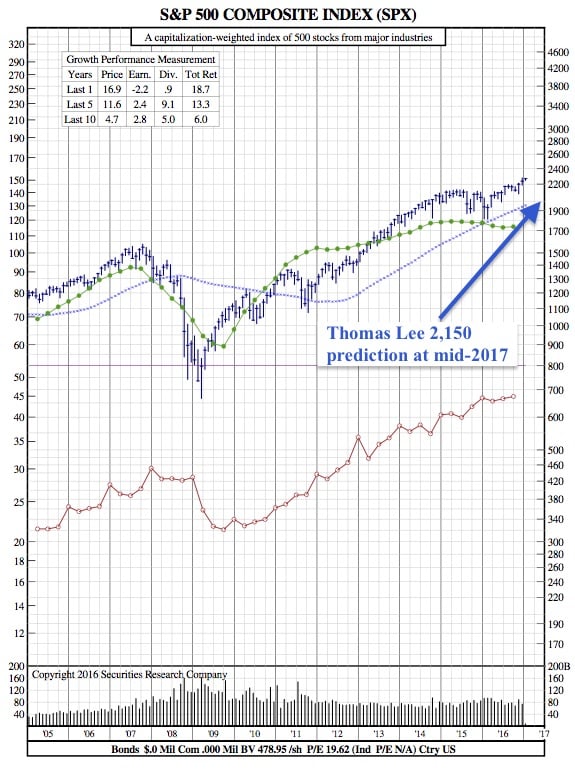 Looking at Tesla’s 12-Year Chart, 2017 May Prove to be Rather BleakBlog