Over the past 22 years, Amazon has come a long way from its online book store. Today, Amazon offers everything from A to Z, Prime, Prime Now, Amazon Fresh, original content that can stand up with the likes of Netflix, HBO, and Hulu, and much more.

So what’s causing Amazon to become so profitable lately? 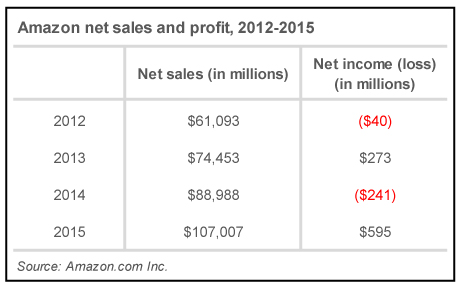 That revenue is coming from several aforementioned business lines, with the most coming from its North American e-retail business (60%), followed by its international retailing business (33%) and then Amazon Web Services (7%), its rapidly growing and highly profitable cloud computing business.

With increased earnings, Amazon has continued to promote business growth through big R&D spending. Amazon increased its research and development funding to $12.5 billion in 2015 from $2.9 billion in 2011. As sales grew, the company doubled down on its R&D investment, which was 6% of total revenue in 2011 and grew to 12% of total sales in 2015. This has given Amazon a positive feedback loop between growth and R&D spending, and the company is likely to preserve this trend as it continues to sell the growth story.

As a result of an increase in sales, Prime subscribers, and improved margins, $AMZN continues to be an interesting long term play.

If Steve Wynn builds it, will they come?Blog, Uncategorized